With all the changes that took place during 2020, one of the biggest ones was the postponing of the 2020 Olympics. Thankfully, the 2020 Olympic Games were moved to 2021, and the world still gets to enjoy all the highest levels of athleticism and competition in Tokyo. We thought this would be the perfect time to reflect on our park's exciting role in the Atlanta Olympics!

In 1996, Atlanta had the honor of hosting the 100th annual Olympic Games. Our hometown city won the bid against six other cities, including Athens, Greece. It is arguably one of the greatest events to happen in our state, especially because it brought over 2 million people to the capital. It was an extensive undertaking and took almost six years and an estimated $3 billion in preparations.

Olympic organizers not only used established buildings for hosting events, but they also set up new structures to host the various Olympic events. Today, Stone Mountain Park is known as an Atlanta tourist attraction, but it actually played a crucial role in accommodating sports competitions in 1996. 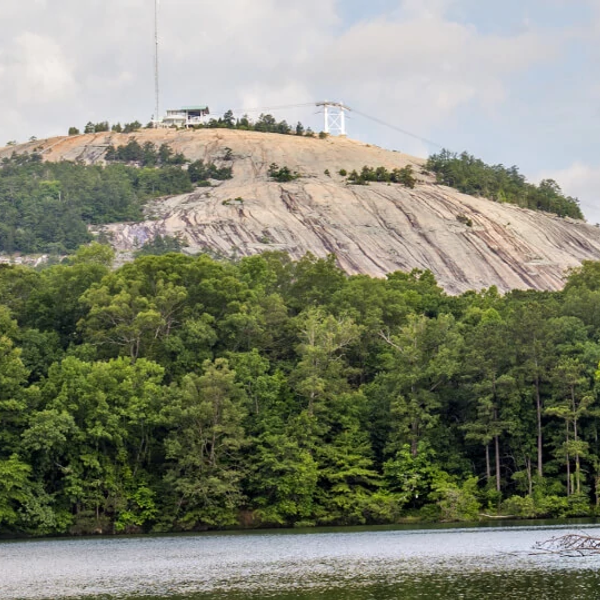 This unique, state-of-the-art Velodrome track was strategically fashioned for cycling for the Olympic Games. Cyclists from around the world raced for gold in this innovative space that stretched 250 meters. In fact, two world records were set during these Games! The 75-ton steel Velodrome was constructed in what is now known as the Songbird Habitat within Stone Mountain Park.

Ironically, the track did not have a trial run before assembly. It was ingeniously created by Mathematica, a technical computing system that used algebraic techniques to formulate all 20,000 pieces of welded steel. The structure contained 236 parts that snapped together and apart easily. However, it was disassembled after the Games and was rebuilt in Quebec, Canada for use inside a national training center.

The Tennis Center was constructed specifically for the Olympics. It was located off of Bermuda Road in Stone Mountain. It took over $20 million to build and had over 12,000 seats for the Games. The center was renovated later to seat 7,200 with 15 courts. Tennis players Andre Agassi and Lindsay Davenport each won gold for the United States at this historic spot.

Unfortunately, things didn’t go according to plan for the Tennis Center to become a leading tennis site after the Olympics. Although the center later hosted other events, such as a concert in 2005 with Robert Flack and Melbor Morre, it mostly remained vacant. Sadly, the Tennis Center was officially closed in 2007 because it was beyond repair. An official ceremony for demolition was held on August 1, 2017.

Archery in the Songbird Trail

Did you know that the archery competition for the 1996 Olympics took place in our very own Songbird Habitat Trail? There were a total of 64 archers competing in our park. Archery first appeared in the games in 1900 but was removed after the 1920 Games, until being reinstated in 1972. The archery competitions were at a range of about 229 feet (70 meters).

Although the trail was cleared for the games, pine trees were planted after the Olympics to restore the trail’s natural state, making it a great hike and one of our favorites. The Songbird Trail is off of Stonewall Jackson Drive inside the park. On this one-mile hike on the former archery and cyclist site, you can spot local birds like the white-breasted nuthatch and northern cardinal.

Summit Skyride and the Olympic Torch

Today, the Summit Skyride is one of the leading attractions at Stone Mountain Park. You can view the mountain up close and see the city of Atlanta from the top of the mountain. From the cable car, you can get a breathtaking view of the scenery of the Appalachian Mountains as you soar 825 feet up the mountain.

Summit Skyride had a famous moment during the 1996 Olympics. Our beloved cable car carried the Olympic Torch to the summit! In light of the exciting occasion, the cable car and top of the mountain complex both received an upgrade. The torch was transported to the top of the mountain and then went to downtown Atlanta for the opening ceremonies, where it was lit by Muhammad Ali.

Beyond the famous 1996 Olympics, Stone Mountain Park is chock full of historic moments. Be sure to visit Memorial Hall to learn more about the park’s history.

Get the latest news and special offers