Camping is not only a time to explore nature, but it is also a time to get away from social media and electronics, in general. When you’re looking for things to do in Atlanta, look in your own backyard, or our backyard, rather. To help you and your family put your devices aside for your next camping trip at Stone Mountain Park, we've comprised a list of fun games to initiate family bonding time! We've included the rules of each game so you can get started as soon as you get to the park. 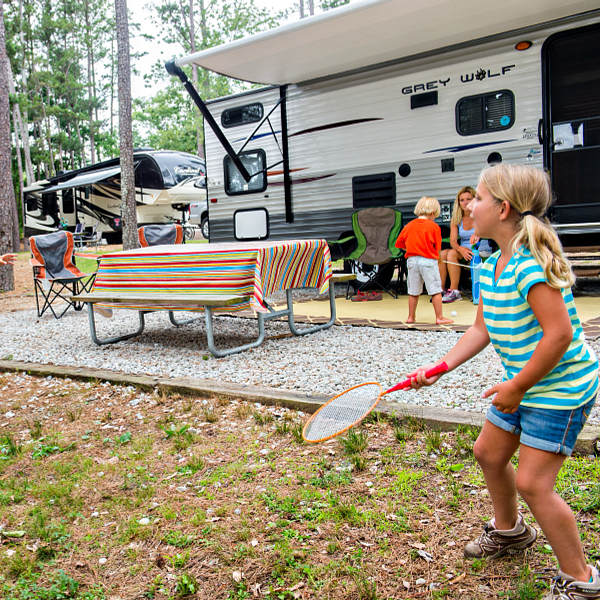 This game, similar to baseball, can be played with between 2 and 10 players. Each team will have a pitcher, who tosses the Wiffle ball to the batter. When the batter gets a hit, he or she runs the bases, just like in baseball, getting as far as possible without getting tagged out.
Unlike baseball, players are not allowed to steal bases, and you only get out if you are struck out or if your hit is caught. The team who scores the most after six innings wins! A Wiffle ball set, along with base markers, can be found at the General Store. This game is great for families and individuals of all ages and skill levels, from the tiniest toddlers to the matriarch and patriarch of the family!

Stone Mountain Campground has a horseshoe court set up on the campgrounds, and all you need to do is show up to play! You usually play with 2 to 4 players, or you can have a few teams of two. Usually, players stand between 27 to 37 feet away from the stake, but you can be closer if you are playing with younger children or aren’t an experienced horseshoe player. The first player throws two horseshoes, one after the other. The goal is to try to ring or hook the horseshoe to the stake at the opposite side, which equals 3 points. You can also score one point for horseshoes that lean on the stake or come within six inches of the stake. When you are scoring, if your opponent scores a ringer on top of yours, the points cancel each other out, and no points are gained. The team or player who scores 40 points first wins!

This game is suitable for larger families or with a group of people. This game is also similar to baseball. The field is set up in a diamond shape with four plates or bases. You need both a catcher and a pitcher, as well as some infielders and outfielders when playing. When kicking a pitch, the ball has to touch home plate before it’s kicked. The teams will switch places, from fielding to kicking and vice versa, after three outs. Game rules state to play six innings, but you can play as few or as many as you’d like. Whoever scores the most wins!

Frisbee only needs a few players and you can toss the disc to one another. Or you can mix it up by playing Frisbee Golf and get some marked baskets to use as the “holes.” Like golf, the goal is to take the smallest number of attempts to toss the frisbee in the basket. Whoever scores the fewest number of points wins.

This classic game is also suitable for a larger group camping together. Each team has a total of up to six players. Preferably, three team members will play in the back and three will play in the front. The first team serves the volleyball and the opposite team is allowed three hits to get it back over the net. The teams keep passing it over to one another until it touches the ground or goes out of bounds. The team keeps serving until they miss the ball and then it switches servers to the other team. Generally, the person in the back right corner will serve, but you may need to be flexible with this depending on the age and capability of those who are playing. Points can only be made by the serving team, and whoever reaches 25 points first wins.

This simple but incredibly fun game just needs a deck of cards and some spoons. Each player is dealt four cards. Place the spoons in the center of the playing area. If six people are playing, you want to have five spoons so that someone will not get a spoon and be out.
The first player draws a card, discards it to the left, and then each player picks up the discard on the right. This continues until someone gets four of a kind. Then, that player tries to secretly pick up one spoon. As soon as the person takes the spoon, all the other players want to do the same. Whoever does not get a spoon is out. Continue playing until there is a winner!

Comprise a list of items to find at the park. Items can be simple like a pinecone or a leaf, or they can be harder to find like a worm or a four-leaf clover. You can divide into groups or break up individually to look for the items on the list within the set time. Whoever finds the most items from the list is the winner!

Next time you’re at Stone Mountain Park campground, try out these game ideas to keep your family entertained!

Get the latest news and special offers