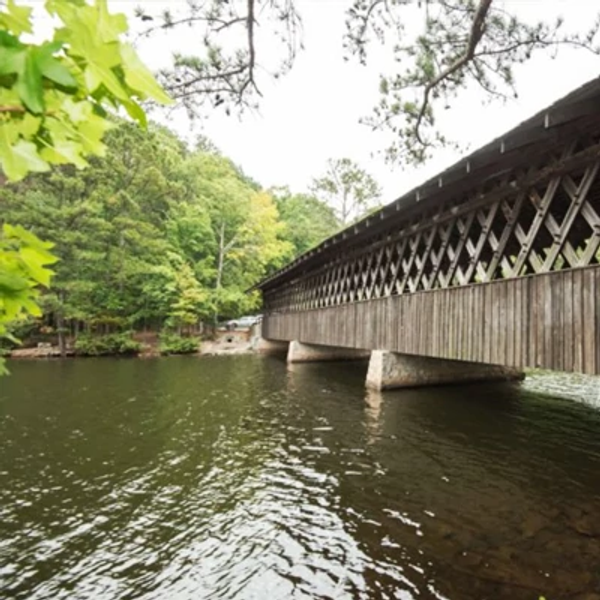 Stone Mountain Park's covered bridge was originally constructed at a cost of approximately $2,470 in 1891 in Athens, Georgia to connect College Street and downtown Athens with outlying farm lands across the Oconee River. The bridge served the community well for decades, until two severe floods in 1910 and again in 1963 damaged the bridge severely, and caused concern for its ongoing use.

The SMMA expressed interest in relocating the bridge to Stone Mountain Park in 1963, and in 1965, the bridge was partially disassembled to make the 60-mile trek before being re-assembled and re-installed atop new cement and granite piers connecting the park to a picturesque island across Stone Mountain Lake.

This covered bridge is one of only four remaining structures of the many created and constructed by Washington W. King. The King family were prominent African-American businessmen for decades in multiple Georgia cities. In 2019, the board of directors of the Stone Mountain Memorial Association (SMMA) unanimously voted to name this historic bridge the Washington W. King Bridge, in memory of, as well as honoring the bridge designer and builder.

Access to the park is included with a daily or annual parking pass.


Get the latest news and special offers